In case I haven’t made it clear enough on these pages, Iron Maiden is my favorite band. I saw them live for the first time in St. Louis (well, Maryland Heights, but close enough), on the Maiden England 2013 tour, and it was one of the greatest nights of my life. I cried, I screamed, I cried, I laughed, I cried, I met some very cool people (and one total dud), and I cried some more.

In 2017, Mrs. Stay Heavy and I made the trek back to St. Louis see them again, this time on The Book of Souls World Tour. It was also a badass show, but being that it was a tour for a new (at the time) album, I enjoyed it a bit less, mostly because I hadn’t taken the proper time to familiarize myself with the new songs.

Tangent: I do not dislike The Book of Souls (I do not dislike any Iron Maiden album as a whole), but like most 21st century Maiden, it suffers from a lack of editing, and from a tendency to repeat the name of the song a thousand times during the chorus. The seeds of the latter issue could arguably be traced back to my Second Favorite Iron Maiden Album, 1986’s Somewhere in Time. Lots of the hype surrounding TBoS focused on the fact that it was the band’s first double album ever, and on the fact that album closer “Empire of the Clouds” was the band’s longest song ever. Long runtimes do not automatically make an album less good, but they also do not inherently make an album better. Anyhoo…

That was also a great show, and even 100+ degree temperatures couldn’t keep us from enjoying ourselves. It contained some notable highlights, such as “Powerslave”, “Wrathchild”, and “Blood Brothers”, and I still got plenty choked up, especially during “Wasted Years”.

Time continued its ceaseless march toward humanity’s much-deserved end, and I continued loving Iron Maiden and counting the days until my next Iron Maiden Live Show Experience, knowing that it would likely be another tour built on classic songs, given the band’s touring history these past 20 or so years. When the Legacy of the Beast tour was announced in November 2017, I started to get hyped. When US tour dates were announced a year later, I almost lost my gotdamn mind: they were playing Indianapolis (well, Noblesville, but close enough)! I was finally gonna get to see Maiden without having to drive 4 hours! (The last time they played Indiana, I’d just started a new job and couldn’t get the day off, and all the times before that, I was either terrible with money and couldn’t afford it, or I wasn’t old enough to be able to afford it.)

I bought tickets the day they went on sale, the missus booked us a hotel room (with shuttle service to and from the venue), and I continued loving Iron Maiden and counting the days until my next Iron Maiden Live Show Experience while time continued its ceaseless march toward humanity’s much-deserved end. Finally, after an especially exhausting month-and-a-half at my job, the day was upon us, and this past Saturday, Iron Fucking Maiden delivered the motherfucking goods.

I honestly didn’t think I could enjoy their live show more than I did that first one back in 2013, but I’m here to tell you, friends, that I was very, very wrong. I’ve been reading about this tour, and about the shows, since the first one, in Estonia, on May 26, 2018, so I knew what to expect; I knew the setlist front to back and back again, and I knew about all the props and Bruce’s costume changes, and I still had my mind blown clean apart. It was like watching a movie (or more properly, I suppose, a theater performance) while my favorite band provided the soundtrack.

My only beef with the setlist going into the show was that they’re still not playing any songs from 1990’s obscenely underrated No Prayer for the Dying (at this point I’m just gonna have to resign myself to the fact that I’ll never get to hear “Tailgunner” live in person), and that they included “For the Greater Good of God” from 2005’s A Matter of Life and Death instead of, for example, “Tailgunner”, or maybe “Man on the Edge”, or even something from 2003’s Dance of Death, which is my personal favorite “post-reunion” Maiden album, but ultimately, “For the Greater Good of God” is still a Very Good Song, so I wasn’t about to let one little hitch get in the way of my enjoyment of the otherwise rock solid setlist.

I bought a shirt immediately after entering the venue, then we hung around and did some talking and people-watching while The Raven Age played. They were fine, but I did not/do not care about them.

Here’s my shirt. I don’t know why the back showed up first, but whatever. 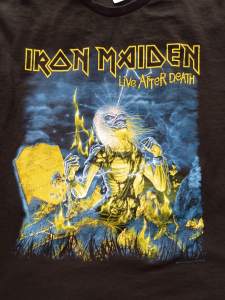 Here’s the front. I spent too much money on it, but I don’t give a single fuck, and I’d do it again.

The show started out with a spectacle that most bands would save for their closing number, but when you bring in the kind of money that Iron Maiden does, you can afford to make every song a closing number if you want. A replica Spitfire WWII-era plane “flew” above the stage during “Aces High”, and it was amazing, but then they followed up with “Where Eagles Dare”, and the transition was flawless, and I almost died of Iron Maiden, and then they played “2 Minutes to Midnight” and “The (motherfucking) Clansman” (Bruce: “This song is called ‘The Clansman’. When you put it on social media, make sure you get the spelling right.”), the Blaze Bayley-era song about William Wallace, and if you think it wasn’t absolutely fucking amazing and liberating to scream “FREEDOM!” along with some 24,000 like-minded Maiden fans, you’d be even wronger than I was when I thought I couldn’t enjoy their live show more than I did that first one back in 2013.

“The Trooper” followed, and it remains the Perfect Heavy Metal Song (in case you were wondering), then they played an absolutely crushing rendition of “Revelations” (if you’re keeping score at home, that’s already three songs from 1983’s Piece of Mind, which happens to be my Favorite Iron Maiden Album), and then they started into “For the Greater Good of God”, and I was suddenly glad they were playing it instead of, for example, “Tailgunner”, or maybe “Man on the Edge”, or even something from 2003’s Dance of Death, because I had to rock a piss like I’d never peed before, and while I walked to the restroom amongst the throngs of fellow middle-aged dudes who were leaving their seats for the first time since the first notes of “Transylvania” played over the PA, it occurred to me that the band knew what they were doing when they included that song in the setlist: old dudes need to pee, and they don’t wanna miss out on “Revelations” while they do it.

I got back to my seat approximately 30 seconds before “The Wicker Man” started, and it was just excellent, and then they played “Sign of the Cross”, and it was fucking epic, and THEN THEY PLAYED FUCKING “FLIGHT OF ICARUS” AND BRUCE SHOT FLAMES INTO THE AIR AND THE OVERSIZED ICARUS ABOVE THE STAGE COLLAPSED INTO ASH AT THE END OF THE SONG, and then “Fear of the Dark” started, and the crowd sang along with every note just like they do in South America (though nowhere near as loud), and then they played “The Number of the Beast”, and then “Iron Maiden”, and then they left the stage, but obviously they weren’t finished yet, because I still had some voice left for shouting and some tears left for crying, so they came out for an encore of “The Evil That Men Do” and “Hallowed Be Thy Name” and “Run to the Hills”, and to steal a phrase from Pantera, it was goddamn electric.

One thing of note: this dude sitting in front of us asked us before the show started if we were sitters or standers, and went on to say that he was in attendance at the Pittsburgh show on 8/17 was yelled at several times to sit down. We then found out that he was, in fact, attending his 5th show of the tour, with one more to go before returning home to Atlanta!(!) Iron Maiden fans are insane, and Justin from Atlanta is one of the good ones. When the show was over, he turned to me and said “how is Indianapolis the best?” I replied “I don’t know, it’s often the worst”, and I wasn’t wrong about that, but no bullshit, that crowd was absolutely figuratively on fire.

I’ve been to hundreds and hundreds of shows in all kinds of venues over the past 26 years or so, and this was certainly one of the two or three best shows I’ve ever attended, and hands down the most exciting. Music is my religion, live music is my church, and I absolutely saw the face of god on the night of August 24, 2019.

Thanks for reading, friends. Stay heavy, and Up the motherfucking Irons.