I’ll be celebrating my 38th birthday later this week, which is an incredibly difficult thing for me to wrap my brain around. Next Tuesday (4/21), my cousin Jason and I will be travelling to Louisville, KY to catch Testament and Exodus on the Dark Roots of Thrash II tour (Texas band Shattered Sun will be opening, but I don’t care about them), and as you might imagine, I am fuckin pumped. 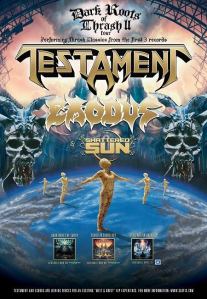 I might not make it out of this alive, y’all.

Testament will be playing their first two albums (1987’s The Legacy and (my personal favorite) 1988’s The New Order) beginning to end, followed by “select Practice What You Preach LP (1989) cuts”.

My favorite thrash band (and second favorite overall band) will be performing two of their greatest works in their entirety! “Over the Wall”! “Burnt Offerings”! “First Strike is Deadly”! “Alone in the Dark”! “Eerie Inhabitants”! “Trial By Fire”! “Into the Pit”! “Disciples of the (motherfucking) Watch”! And all the rest! I might figuratively die from blood loss to my brain from the raging thrash boner I’ll have, if I don’t figuratively die from a broken neck first!

Plus their badass cover of a badass Aerosmith song (which I admittedly only know because of Testament’s cover)!

But before that even happens, Exodus will thrash my balls clean off with a set consisting of songs from throughout their storied history. A quick perusal of setlists from the past few nights of the tour shows 12 songs, which is pretty sweet, although it does seem that I’m still not gonna get to hear “And Then There Were None” live, which is a bit of a bummer, but I can’t really complain. Plus, they’ve been playing “The Last Act of Defiance” on this tour, which is rad as hell.

Also, they’re playing two Rob Dukes-era songs, and I look forward to hearing those with Zetro on vocals.

Five days later, on 4/26, Cousin Jason and I will be heading north to Indianapolis to see the mighty Death Angel live, on one of only two headlining shows on their current tour! This will be the first time Death Angel has played Indianapolis since 2012 (when they opened for Anthrax and Testament at the Egyptian Room), and their first headlining show in Indianapolis in 25 fucking years! Motherfucking shit-tits, friends, this is an exciting goddamn month!

Here’s “Truce”, from 2011’s Relentless Retribution, which is the album they were touring on when I saw them a few years back:

And here’s one of my favorite songs of theirs, from 1990’s Act III, which was the last album they released before their original breakup:

A quick shout-out and a HUGE thank you is owed to my amazing wife, who had a hand in making both of these shows happen for me.

Reviews of both shows will of course be forthcoming, and if things work out, there’ll be an extra surprise on these very pages in a couple of weeks. Stay tuned, and stay heavy!

4 thoughts on “Thrashy Birthday to Me”