Y’know who doesn’t like Married…With Children?   Fascists (for all I know) and self-righteous religious types, that’s who. Since I am neither of those things, I, of course, love it to the ends of the earth. I even wrote a paper about it years ago for a 300-level college history class (and I got an “A” on that sumbitch, too boot!).

Way way back, Indianapolis, Indiana had a TV station known as TTV-4, or to most people, just “Channel 4” (it later became an affiliate for The WB, then a CW affiliate, and just recently, it became Central Indiana’s CBS affiliate, which, for reasons I can’t really explain, seriously fucks with my worldview), which was an independent station that during the day aired cartoons (morning and afternoon), talk shows, original children’s programming, and old TV shows in syndication (The Brady Bunch was one of the most common).  In the evening, movies, Indiana University basketball games, and other syndicated TV shows (Sanford and Son, M*A*S*H, the 1960’s Adam West Batman (Julie Newmar’s Catwoman taught me a lot about growing up),  Mama’s Family, Diff’rent Strokes,  etc.), and on Saturday evenings, Hoosier Millionaire, a game show featuring contestants who won their spot on the show by playing the state lottery.

When Married…With Children began airing in syndication on Channel 4,  I was stoked.  The Fox affiliate station in Indianapolis didn’t have a strong enough signal to reach us out in the middle of nowhere (as I’ve mentioned previously in this blog, I grew up without cable television), and the signal from Louisville was weak and not easy to watch (that didn’t stop me from watching it, but it looked static-y and terrible), so I finally got a chance to see one of my favorite shows with an almost cable-TV-like clarity.

When the episode featuring Anthrax aired, I had to tape it, because I knew I might never see it again (living in the pre-internet era was hard, y’all!).  Like many Old-Ass VHS Tapes, I still own this one, and it lives in a box in my basement, only to get trotted out from time to time when I’m feeling nostalgic.  Without further ado, here’s the Old-Ass VHS Review of Season 6, Episode 18 of Married…With Children, “My Dinner With Anthrax” (original airdate: 2/23/92 – Quick note: I started writing this review sometime back in October or so and didn’t get around to finishing it. Then today I randomly decided to finish it, only to realize after finishing that the episode aired 23 years ago today!). 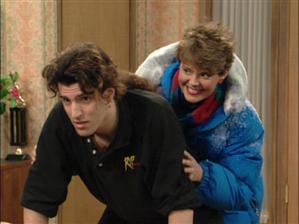 No case to protect this one.  The tape was originally a 30-ish minute cartoon tape (most likely purchased at Big Lots) entitled Porky Pig and Friends, which featured two Porky Pig cartoons followed by two completely unrelated Warner Brothers cartoons, a cash grab by some unscrupulous company that clearly had no idea (or perhaps did not care) who Porky Pig’s friends actually were. (Side note: one of the other cartoons was called “The Dover Boys at Pimento University”, and it was (and is) hilarious, and you should look it up on your own time.) Written on the label is “Gallagher: Over Your Head”, which I’d taped half of off Channel 4 prior to the airing of “My Dinner With Anthrax”.

The tape begins with the end credits to The Golden Girls, flowing directly into commercials for Miller Genuine Draft Light and the Rad-n-Bad Arenacross Nationals, which the internet tells me were held at the Hoosier Dome in Indianapolis on February 5, 1993.  The episode begins after this, with the commercials mostly cut out, and it’s pretty straightforward.  If you haven’t seen it, you should; it’s a good one.  I used to think the band members were pretty terrible actors, but honestly, when I watched it recently for this review, I was pleasantly surprised to find that they weren’t as bad as I’d always remembered.

After the episode ends, the tape cuts into a feature on the Phoenix Suns, featuring Gilbert Gottfried.  I used to be a Phoenix Suns fan back in the Charles Barkley days, which is also when I last gave any kind of a shit about basketball.  Sometimes I’m not very good at being from Indiana.

A trailer for National Lampoon’s Loaded Weapon 1 was fun to see, as was the commercial for “the new Cutlass Ciera, starting at ‘thirteen nine ninety-five'”.

Anthrax on Married…With Children is a highlight unto itself.

The picture is a little fuzzy throughout, but the quality is pretty good overall, especially considering the age of the tape, and the number of times I’ve watched it.  It does get a bit rolly and choppy when the band starts talking, but I imagine I’ve watched that part more than the rest of the episode.  The sound is decent.

As with my other Old-Ass VHS Tapes, you’re welcome to come over and watch this one with me.  You don’t even have to bring your own beer for this one, since it’s less than 30 minutes long (although if you wanna stay and watch one of the other Old-Ass VHS Tapes afterward, you should probably BYOB).  YouTube doesn’t have the full episode up for free, so here’s a clip.

4 thoughts on “Old-Ass VHS Review, Volume 3: Married With Children – “My Dinner With Anthrax””