Happy Thrash Thursday!  This is the first time since starting this blog that I’ve had both the time and the motivation to put together a Thrash Thursday post on Thrash Thursday, and I’m pretty stoked about that.  Hopefully this will be the beginning of an amazing run.  Or at the very least, y’know…a run.  Onward!

If you need to catch up on the story of Testament, as told by me, you can do that here and here.  You’ll note (or perhaps recall) that this story began as a tangent from a related topic, a common occurrence for me.  The original topic will be revisited here eventually.  In case you’re in a hurry, or simply can’t be bothered to click links, here are the essentials you need in order to be caught up for The Final Testament:

1. Testament formed in Oakland, California in 1983 as Legacy, featuring Steve “Zetro” Souza on vocals.  Souza left the band in 1986 to join Exodus, and Chuck Billy took his place.  The band changed their name to Testament that same year.

2. Testament has had several line-up changes over the years – the only original member from the 1983 formation is rhythm guitarist Eric Peterson.  Peterson and Billy are the only two members who have remained in the band since 1986.

3. Testament’s sound has evolved from their pure, godly thrash metal origins, experimenting with death metal sounds, and, like most of the 1980s thrash bands, flirting with groove metal a bit as well.

With that, The Final Testament begins…

After the release of the ultra-heavy The Gathering in 1999, veteran guitarist James Murphy was diagnosed with a brain tumor.  The tumor was successfully removed, but Murphy has no memories from the recording of The Gathering.  He continues to write, record, and produce music today.  In 2001, vocalist Chuck Billy was diagnosed with a rare form of cancer called germ cell seminoma.  This type of cancer usually afflicts the testicular region, but Billy’s cancer was even more rare, as it grew his chest.  A fundraiser called “Thrash of the Titans” was held to raise money for Billy’s treatment.  Many Bay Area Thrash Metal bands (as well as some non-Bay Area Thrash Metal bands) performed at the event, some – such as Death Angel and Vio-Lence – for the first time in years. 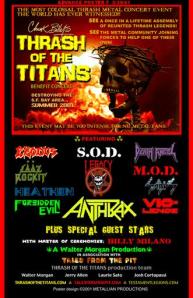 Seriously, look at that fucking lineup!

A Legacy reunion was part of the lineup as well, featuring Zetro on vocals, and former Legacy/Testament lead guitarist Alex Skolnick, who left the band in 1993.  Original bass player Greg Christian also joined the band onstage, though bass duties were largely handled by fretless bass wizard/then-current Testament member Steve DiGiorgio.  In 2001, Testament went into the studio and recorded First Strike Still Deadly, a collection of re-recordings of songs from the band’s first two albums.  The lineup for this album was Chuck Billy on vocals (Souza recorded vocals on the last two songs), Eric Peterson on rhythm guitar, Alex Skolnick on lead guitar, Steve DiGiorgio on bass guitar, and John Tempesta on drums.

By 2003, Chuck Billy was cancer-free, and the band began performing live again, with a different lineup again.  Aside from Billy, Peterson, and DiGiorgio, the names don’t matter much.  Here’s what does matter: in 2005, Testament announced a brief European tour called “The 10 Days of May”.  The lineup for this tour was Billy and Peterson in the usual positions, along with the return of Alex Skolnick and Greg Christian.  Drumming duties were split between John Tempesta and original drummer Louie Clemente.  The tour was a smashing success, and the band went on to tour more of Europe, Japan, and the United States with the same lineup.  An outstanding DVD (Live in London)  was released in 2005, after the original tour.

The band was rejuvenated, and the original members (sans Clemente) began writing music together for the first time since 1992.  In 2007, Paul Bostaph (formerly of Forbidden Evil, formerly and currently of Slayer) rejoined the band on drums, and in 2008, most of the original lineup of Testament released the monumental The Formation of Damnation, their first studio album of original material in nine years.  It’s not their best album, but it’s a damn fine return to form for a band so fraught with hardship and strife.

“More Than Meets the Eye” from The Formation of Damnation (2008)

The band continued to tour like mad, and also began to write new material for another album as early as 2009.  In 2011, they were set to record their tenth album when Paul Bostaph was sidelined due to a wrist injury.  Drum maniac Gene Hoglan re-rejoined the band to assist in recording (Lamb of God’s Chris Adler contributed as well), and on July 27, 2012, Testament released one of the best and heaviest albums of their career, Dark Roots of Earth.  Absolutely punishing riffs, drumming, and bass work form a nearly impenetrable wall over which Billy screams (and occasionally sings) like a man possessed.  Highlights include the entire fucking album.  Seriously, not a single weak spot.  Three-quarters of the members of the “Big Four” wish they could still create something so fierce and relevant.

“Native Blood” from Dark Roots of Earth (2012) – Chuck Billy is a member of the Pomo Indian tribe of Northern California.  This video won the Video of the Year Award at the 2012 Native American Film Festival.

The deluxe edition of the album also features three cover songs – “Animal Magnetism” by the Scorpions, Queen’s “Dragon Attack”, and this little number:

The band has pretty much toured their asses off (with Gene Hoglan staying on as the official drummer) since, and in 2013, they released a live CD/DVD combo entitled Dark Roots of Thrash, recorded live on February 15 at a sold-out show at The Paramount Theater in Huntington, New York.  It is a perfect snapshot of a fucking amazing veteran heavy metal band at the absolute top of their game.  It has caused me on more than one occasion to mosh around my living room like I was 14 years old.

Earlier this year, the band announced that they were amicably parting ways with bass player Greg Christian.  The news makes me sad, as I truly believe Greg Christian is one of the great unsung metal bass gods, but the band’s choice to replace him couldn’t be better, as Steve DiGiorgio has re-re(re?)joined Testament.  If this lineup stays in place, I imagine their next album, which should be released later this year, could be a serious contender for The Heaviest Thing Ever Recorded.